When the American Society of Concrete Contractors was planning their annual convention for September in Chicago, organizers wanted a new way for their members to see and understand some of the latest innovations in the concrete construction industry.

Their idea: a "shark tank"

Inventors and manufacturers would have the opportunity to stand in front of the biggest concrete contractors in America and describe their latest innovation: no demos, no props, no visual aides.

Beast Form Stake works with Beast® Foot in concrete forming applications to mount concrete forms at their appropriate height without driving a metal nail stake through the vapor barrier, the builder’s critical layer of below-slab protection from water vapor and soil gases.

Lutes kept it simple when he entered the shark tank.

“It’s hard for you to set those forms without puncturing our vapor barrier,” he said, before explaining how Beast Form Stake allows for puncture-free forming.

After the four-minute pitch, we approached some of the biggest names in the industry with a Beast Form Stake to ask their first impression.

Paul Albanelli, Albanelli Cement Contractors: “When you have a situation where you’re puncturing the vapor barrier is a big issue. These are an ideal solution.

Keith Wayne, Wayne Brothers Companies: “This will help eliminate some of those holes that were getting punched.”

Byron Klemaske II, TB Penick & Sons, Inc.: “That would work. I see it working twofold for us: on vapor barrier, but even when we don’t have a vapor barrier on a waterproof deck.”

Mike Schneider, Baker Concrete: “When you look at this, this is one of those things that is so simple, you say, ‘Why didn’t I think of that?’”

Tim Manherz, TAS Concrete: “I know it’s been an industry issue, but if we can change that mentality, that’s a big deal. Because that’s where we’re compromising the system.”

Beast® Concrete Accessories launched in 2016 with the Beast® Screed system, which allowed concrete crews to achieve better floor levelness (FL) numbers while improving upon outdated wet-screed methods. Along with Beast® Hook (for overhead screed rails) and Beast® Deck Foot (for elevated decks), the line was honored with three successive “Most Innovative Product” awards from World of Concrete in 2016, 2017 and 2018.

STEGO INDUSTRIES, LLC is a leader in the below-slab vapor barrier industry. The most-specified vapor barrier in the United States, Stego earned this distinction across North America by earning the respect, trust, and recommendation of the design, engineering and construction communities. Our game-changing barrier solutions are a critical component in the design and construction of efficient, durable and healthy buildings. Stego Industries provides science-based solutions, field-tested results, and strategic speed to market from its 100% solar-powered headquarters in San Clemente, California. 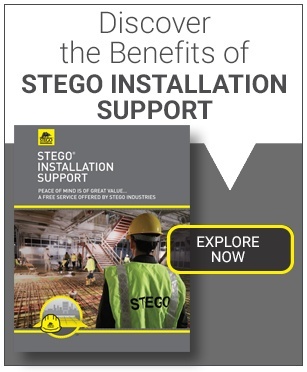 Have the latest post sent right to your inbox.
Enter your email below.