What Makes a Vapor Barrier Different than a Vapor Retarder?

The Relationship Between Under-Slab Vapor Retarders and Vapor Barriers 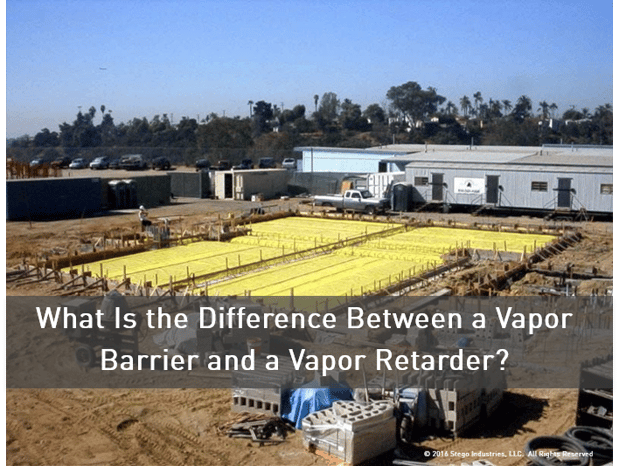 “Vapor retarder” is the term used to describe materials of varying types and classifications which impede the infiltration of water vapor into a structure. Often the term “vapor barrier” will be used interchangeably with the term “vapor retarder,” with no repercussions. But for under-slab applications, it is important to understand the distinctions between the two terms to avoid negative impacts on your project.

An under-slab vapor barrier can be simply defined as a type of vapor retarder with a permeance rating of 0.01 perms (which in the US is defined as one grain of water vapor [unit of mass] per hour [time], per square foot [area], per inch of mercury [pressure differential]) or less.  This performance criterion has been cited by numerous experts and organizations within the industry—including the American Concrete Institute Committee 302—as an important benchmark, especially where moisture-sensitive flooring materials are utilized.  Whereas the most common vapor retarder is a 6-mil sheet of generic polyethylene, vapor barriers are typically composed of high-quality plastic sheathing and/or metal film, like aluminum, that greatly impedes the diffusion of water vapor. All under-slab plastics, be they retarders or barriers, should be evaluated per ASTM E1745 “Standard Specification for Plastic Water Vapor Retarders Used in Contact with Soil or Granular Fill under Concrete Slabs.”

Vapor barriers are necessary for highly sensitive buildings where moisture prevention is central to the integrity of the facility and its components. Buildings that utilize humidity controls and/or moisture-sensitive flooring materials can benefit greatly from utilizing an under-slab vapor barrier rather than a retarder.  Even projects that are not considered highly sensitive should often receive a vapor barrier, and because there is typically minimal additional cost involved in upgrading these products, barriers have become the rule rather than the exception.

The most durable vapor barriers are typically constructed from plastic sheeting composed of high-quality polyolefin resins. These barriers are designed to withstand the toughest of conditions during the construction process, are highly resistant to punctures from heavy machinery, and maintain a low permeance rating (0.01 perms or less).

How to Install a Vapor Barrier or Vapor Retarder

As important as it is to understand the classifications of vapor retarders and barriers and their applications, this is only part of the process. To properly protect a structure from moisture, it is important to know how to install these materials. There are distinct specifications for the installation of the vapor retarder or barrier in below-grade applications. One such specification is ASTM E1643 “Standard Practice for Selection, Design, Installation, and Inspection of Water Vapor Retarders Used in Contact with Earth or Granular Fill Under Concrete Slabs.” A clear understanding of this specification and how it will be applied to your project is imperative to successfully controlling moisture migration.

Foundation slabs require vapor barriers to help prevent the unchecked infiltration and accumulation of both water vapor and other possible soil gases. ASTM E1643, as noted above, provides details on how to properly install vapor barriers under slabs. Although fill layers are occasionally placed between the vapor barrier and the slab, vapor barriers are typically placed over the capillary break (if specified) and directly beneath the slab.

A vapor barrier should be installed under the concrete slab of any basement with a capillary break underneath it. This allows for the basement to remain dry as the below-grade capillary break drains liquid away from the enclosure while the vapor barrier inhibits vapor diffusion. Additionally, basement walls may need to receive both a waterproofing system and a vapor barrier for similar reasons.  These systems are particularly important for conditioned basements where insulation-- such as rigid (e.g. EPS) or spray foam systems-- may be installed and which will need to remain dry in order to be maximally effective.

Most crawl spaces will have dirt floors, especially in homes, which naturally absorb moisture. Consulting a professional to find the best vapor barrier and proper installation process is key to preventing moisture build-up in these spaces.

Distinguishing the relationship between vapor barriers and vapor retarders has been complicated by ever-changing practices and standards in the building industry. Codes are constantly being updated and terminology is often misused, causing people to interpret them in a variety of ways. However these terms are interchanged, it should be understood that vapor barriers are considered to be the most effective product for under slab applications, and are recommended over vapor retarders applications where vapor protection is important.  There are few projects where this is not the case.

Knowing the building design specifications and code requirements for your project will make the process of selecting a vapor barrier easier. Regardless, consulting one of our moisture protection experts will ensure that you find the product that is best suited for your building project.