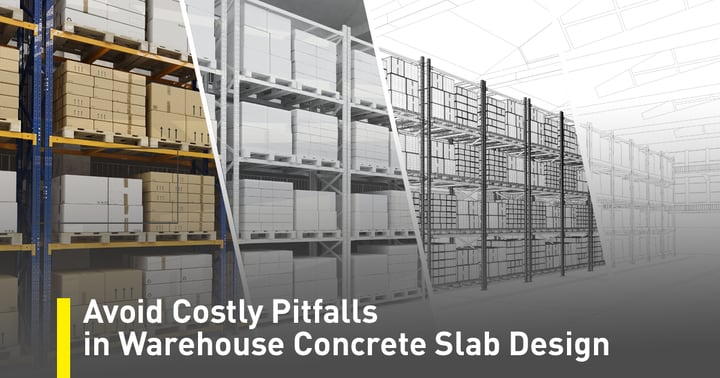 It's just a concrete floor.

Historically designers, builders and occupants of industrial buildings may have whistled past their concrete slabs without considering the lack of under-slab water vapor protection they put into their slab design. That is, until they were confronted by one of a fearsome trio of very costly disasters.

The reason each can be so costly is because you only get one chance to get it right; undoing any one of these problems in your facility can consume massive amounts of time, labor and resources.

In the 21st Century, slab design in industrial facilities is not as simple as placing and finishing concrete. Once confronted by any of the logistical and design calamities mentioned below, you’ll never take protecting your under-slab for granted again.

Consider these three costly scenarios before your next industrial building project breaks ground so you can come up with the best warehouse design: 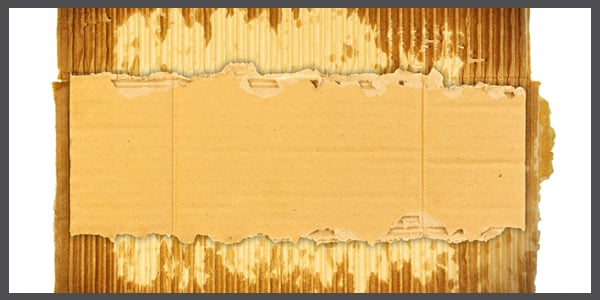 Destroyed warehouse goods from a lack of under-slab moisture protection.

Chances are the monetary value of the inventory passing through the facility will, over the life of the building, dwarf the cost of the building’s design, construction and components.

And yet builders and designers will often be sparing in one critical aspect of their slab design, inadequately protecting it (and their inventory) from water vapor. 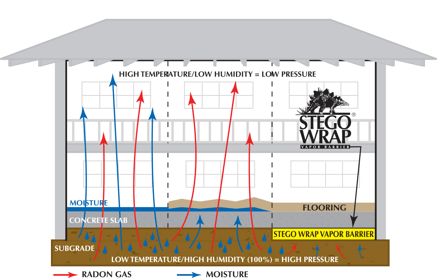 Fact: Concrete is porous. The scientific phenomenon of vapor drive – where water vapor will, to use a simplified metric, diffuse from a higher relative humidity environment to a lower humidity environment – is plenty strong enough to “push” water vapor from the subgrade through concrete into the building envelope. No climate – hot, cold, humid, arid – is immune from this reality.

Then the goods begin to move through the warehouse. When in contact with an exposed concrete floor, these goods can first act like a floor covering, causing condensation through the accumulation of water vapor. They then can act as a sponge, absorbing the condensate. In many cases, this is enough moisture to destroy inventory – meaning the absorption of water vapor can also lead to the absorption of costs on your balance sheet.

You would never let a water source come in unchecked through the walls or ceiling of your industrial facility. Why would you allow it to destroy your inventory through your floor? 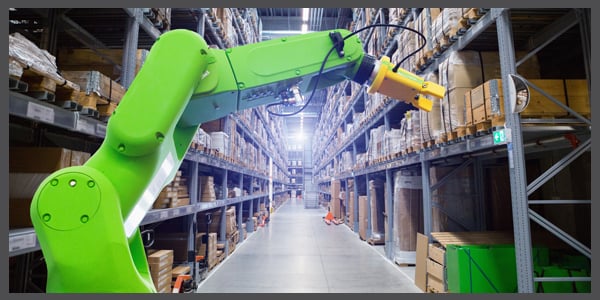 In the 21st Century, one of the most important performance characteristics of an industrial facility’s floors is a robot’s (and other equipment, automated or otherwise) ability to move seamlessly on its path to fulfillment.

In this case, the seams that would get in the way of the robots are joints or saw cuts in the slab design. In response, the concrete construction industry has stampeded toward extended joints and jointless slabs to accommodate the new robot-driven warehouse designs.

“Just five years ago, there was a seminar at World of Concrete for extended joints that was sparsely attended. Five years later, it was standing-room-only,” said Steve Lewis, the owner of Lewis Construction, Inc. of Schofield, Wisc., a concrete construction firm that specializes in large industrial building projects.

Satisfying the specifications of a high-performance floor for the use of robotics in an industrial facility requires exceptional skill and high capital investment in equipment, technology and training.

“When I was starting out many years ago, if you had a floor flatness (FF) that was 30, you were doing pretty well,” Lewis said. “Now you have a customer demanding FF 50.”

One of the integral ways to achieve that type of flatness in a slab is to prevent slab warping, which many in the industry refer to as curling or slab curl.

Video: Get a 3-minute overview of the hard facts about concrete slab curl in this Stego IQ episode.

A slab warps when it develops a moisture gradient, which will exist if there is inadequate water vapor protection beneath it. As we learned in the event of inventory destruction in our first disaster, floor slabs cast in every climate will likely feature a moisture gradient between the typically wetter subsurface and the typically drier building envelope.

Unprotected, a slab will suffer volume changes from this moisture gradient, where the top of the slab will become drier over time, and its edges will begin to curl upward, destroying the flatness of the floor. This long-term phenomenon can take months or years to develop; when it does, it will take untold amounts of money, time and labor to correct, to say nothing of the loss of revenue if the industrial facility is taken offline to fix.

If you’re an industrial building owner or designer dealing with a warped concrete floor, wouldn’t you want to avoid these horrific situations?

Disaster #3 | What Does Your Future Hold? Planning Ahead for the Best Warehouse Design 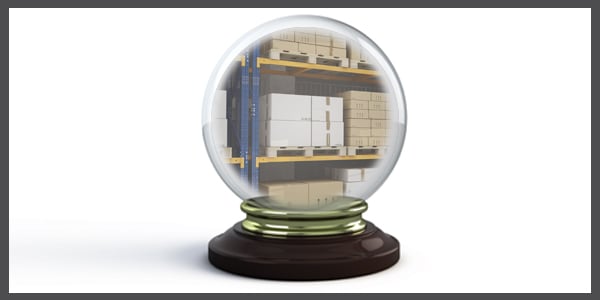 The future plans of a building can be unpredictable. That's why design professionals should plan, specify and and build to protect beyond initial project intent.

The story of the concrete construction industry’s move toward higher-performing floors includes an important lesson for our third disaster scenario: is what you are doing today what you will be doing five years from now? Now ask the same question about your industrial building: will it be serving the same purpose or the same tenants in 5, 10 or 20 years?

Of course, it’s impossible to know. That’s why all design professionals, owners and developers should plan, specify and build to protect beyond initial project intent.

Article: 10 Critical Reasons Why You Need a Below-Slab Vapor Barrier

What if the warehouse eventually needs floor coverings? Or air conditioning? Or an additional build-out for office space or other use?

This may not sound like a disaster, just an adaptation. But if you did not design your slab with future use in mind and skipped out on below-slab moisture protection, you could have a headache in store that costs you time, money and resources.

In each of the future use scenarios we’ve laid out – and countless others – water vapor diffusion through an unprotected slab will make reconfiguration costly and maybe even a disastrous failure:

Disaster Prevention: Protect Your Slab Before the Concrete is Placed 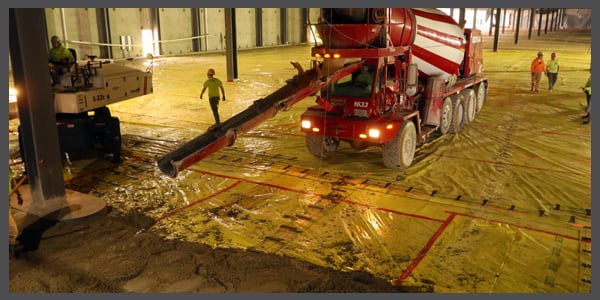 You can save yourself headaches and potential financial losses if you protect the warehouse slab with a vapor barrier.

What makes each of these scenarios a disaster is that there are no fixes in slab repair that are both easy and inexpensive. The impacts of each can be profound, either through tangible loss of inventory, the crushing, invisible cost of building inefficiency or the inestimable costs of repair.

The good news: these disasters – unlike the natural variety – can be prevented! Even better, compared to the relative cost of the repairs, the cost of preventing a slab disaster is miniscule!

The American Concrete Institute (ACI) has a simple flowchart that, when compared to Disaster #3, can see the future!

If you answer ‘yes’ to any of these scenarios for your facility – either now or in the future – a high-performance below-slab vapor barrier with extremely low permeance can eliminate the water vapor diffusion through the foundation which set off each of these disaster scenarios.

Video: Stego IQ | What Does a Perm Rating Mean?

Electing to protect your slab with a vapor barrier is the quintessential “ounce of prevention” extolled by Benjamin Franklin. Except that in the modern design space of warehouses and other industrial facilities, the “pound of cure” can cost in the millions of dollars – in inventory, inefficiency or repair -- while prevention only costs pennies per square-foot.

Don’t however, be penny wise and pound foolish. Some minimum codes can call for simply protecting the slab with conventional 6-mil polyethylene sheeting, which are often predominantly comprised of recycled and/or low-quality raw materials, which can make them brittle or weak, subject to degradation and highly inconsistent.

Just like the lower floor flatness demands of yesteryear, Steve Lewis’ 35 years in the concrete construction industry also comprised a time before high-performance membranes were available to protect slabs.

“Poly was a joke. We’d poke holes in it to get the bleed water to drain out,” Lewis said.

This year, Lewis and his company will place millions of square feet of high-performing concrete flooring in some of the most high-profile industrial building projects in the world.

“You need the vapor barrier to do its job,” Lewis said. 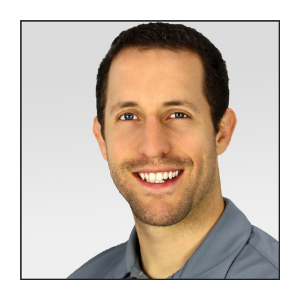