Cold Feet? How to Prepare Your Crawl Space for Winter Temperatures

Recently, I was talking to a homeowner who said one of the main reasons they made the decision to work on their crawl space was because their feet get cold walking around their house, especially in the winter months. It was a physical clue to them that something was going on in that forgotten space beneath their floor which needed to be addressed. I like my feet warm too, so while it’s a good enough reason to make improvements, there are other impacts that cold temperatures in your crawl space can have on the overall performance of your home.

Let me share with you what you can do to keep your home warmer in those cold winter months.

🏡 Reasons for Cold Feet (Literally)... In Your Home

For this homeowner, it didn’t take long for them to understand the reasons why their feet were getting cold during the winter. First of all, crawl spaces tend to be cooler by nature. They are generally below-grade, which will be a lower temperature than the inside of the home, especially when the home is heated during the winter. The earth outside the crawl space, particularly toward the surface, will certainly be even colder during times of the year with cold ambient temperatures, snow, etc.

Like many homes built on crawl spaces, this one also had open foundation vents. There are a number of reasons why building science has shown open foundation vents in crawl space tend to cause more harm than good. Some of these considerations tend to focus on parts of the country where warm, humid air movement can infiltrate vented crawl spaces and create moisture-related problems. But there are also potential concerns in other geographic areas where cold outside air is more likely to migrate into the home’s crawl space during parts of the year.

To make matters worse for these homeowners, there was no insulation in their crawl space. Imagine walking outside on a cold day bundled up in snow gear but wearing only sandals on your feet; that’s how their house was essentially built. This is common in older homes where the crawl space was generally considered more on the outside of the home than part of its interior.

Cold temperatures in the crawl space are part of the problem, but they become more pronounced due to the natural movement of air in and out of homes, known as the stack effect.

Like a chimney, this building science phenomenon causes air entering the home from lower floors – like the crawl space – to flow up and out the top of the house through attic vents or other openings in the envelope. We all remember “warm air rises,” but as it rises and escapes, it is replaced by air from below to maintain an equilibrium. The stack effect is strongest in winter months where the house is being heated, increasing the degree of airflow the colder it is outside.

Stack effect is a big reason why we often say this: what is in your crawl space can affect your entire home. If the crawl space air is cold, stack effect will move that cold air through the home.

Here is a closer look at some of the potential impacts cold temperatures can have in homes with crawl spaces:

🌡️ A Warm Solution: 5 Ways to Make Your Home More Comfortable This Winter

The good news is like with many broader crawl space concerns – moisture, mold, dirt, soil gases, etc. – a proven solution to “winterizing” your crawl space permanently is to completely seal it from the outside and treat it more like the rest of their home – dry, clean, and comfortable. 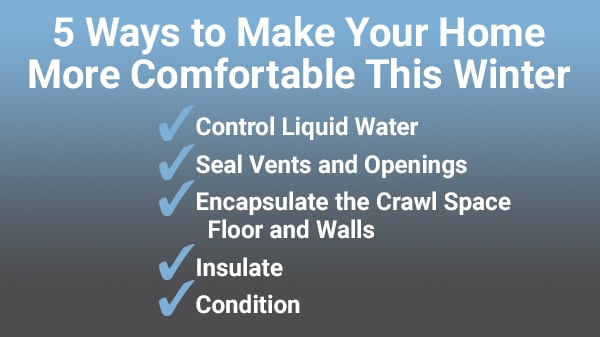 Always check your local building codes, but here are the important steps you’ll want to keep in mind:

Your crawl space and the rest of your home are now more alike and working together. 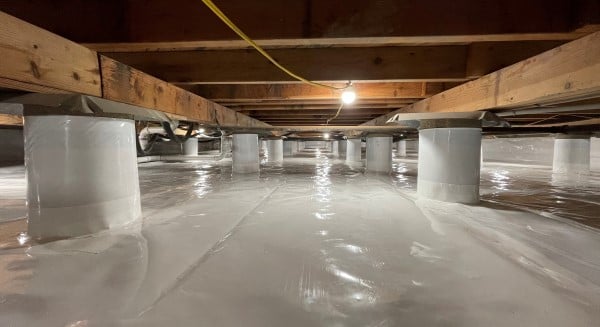 To boil this down, we’ve also created a checklist for you to keep handy when you embark on this home improvement project – because unlike the 20th Century thinking of crawl space construction, this area is most certainly part of your home.

You’ll see a lot of benefits to a clean, dry, and comfortable crawl space… including happy feet. 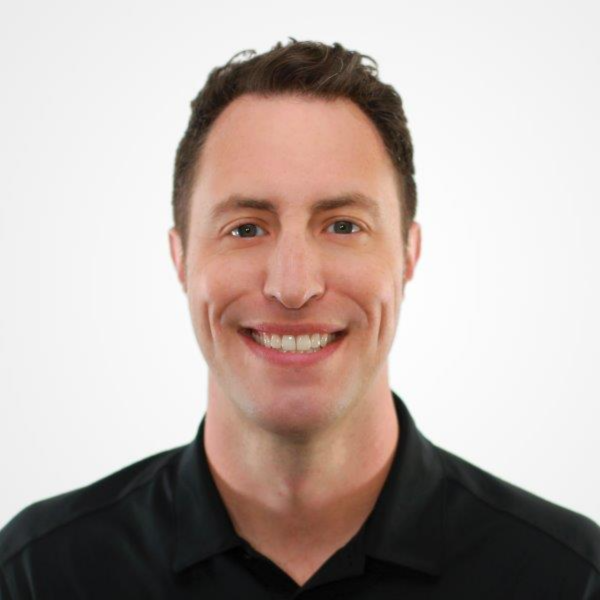